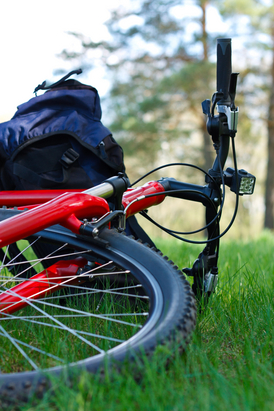 Two former law enforcement officials have confirmed that the red bicycle Levi Frady, 11, was riding before he went missing Wednesday, Oct. 22, 1997, had been moved from wherever it was first found.

“There were no fingerprints on it, not even Levi’s,” said a former Dawson County Sheriff’s deputy who worked the case in 1997 with Sheriff Billy Carlisle. “It was wiped clean.”

Frady was less than a mile from his Forsyth County, Ga. home when he was allegedly abducted. Less than 16 hours later, his body was found in a remote, heavily wooded tract of Dawson Forest Wildlife Management area. He had been shot multiple times.

Additionally, a former Forsyth County Sheriff’s deputy, who was assigned to guard the bicycle after it was found on Little Mill Road early Thursday morning, Oct. 23, said he noticed something unusual.

“I crouched down and looked across the grass, and I could see footprints in the dew,” he said. “I knew it was a crime scene from the minute I got there.”

William Bearden, 11 at the time, first found Levi’s bicycle on his way to catch the school bus Thursday morning, Oct. 23, 1997.

“I think he was abducted right here,” said Bearden, who was 26-years-old when interviewed for a report conducted by CBS Atlanta, Jan. 12, 2012. According to Forsyth County tax records, a Bearden family resides on Little Mill Road near a narrow creek in a heavily wooden area not visible from any homes.

Bearden, however, was not the first to spot the bike.

According to an AJC report on Friday, Oct. 24, 1997, Laci Frady, the boy’s fraternal twin, spotted the bike Wednesday night while she and her mother, Marilyn Parkman, mounted their own search after Levi did not return home at 6:30 p.m. — the designated time, Laci Frady said Thursday (Oct. 23).

Laci later recalled that her mother simply didn’t react when they saw the bike, according to an Nov. 9, 1997 Atlanta Journal Constitution report.

Forsyth authorities initially believed they were investigating a missing child report until word reached deputies that a body matching the description of Levi Frady had been found 19 miles away by three deer hunters.

Yet, Levi Frady’s Burruss Mill home was not roped off as a crime scene.

“People were all over the place — inside and out,” the FCSO deputy said. “It wasn’t until another six to eight days passed that they (GBI) went back and looked at the house.”

Sheriff Billy Carlisle is slated to retire in December after more than 20 years in law enforcement. He took office Jan. 1, 1997. Prior to his election, he worked for the sheriff’s department starting in 1985.

According to an Oct. 15, 2014 report in the Dawson News & Advertiser, Carlisle said that after nearly 20 years as sheriff, one unsolved case still haunts him — the murder of 11-year-old Levi Frady in Oct. 1997, nine months after he took office.

“I strongly believe it was somebody Levi knew and trusted,” he said. “That’s what my gut tells me. You go back and look and maybe some people didn’t tell us everything they knew because they were afraid they might be next.”

Forsyth County Sheriff Denny Hendrix took office Jan. 1, 1997. He served one term and was defeated by Ted Paxton in 2000. (An upcoming post examines problems inside both Forsyth and Dawson County sheriffs’ departments around the time of Frady’s disappearance).

Levi Frady would have celebrated his 30th birthday March 6. What would he have been doing as the warm, spring sunlight streamed through the pine trees and illuminated the strawberry fields near his boyhood home? Maybe he would have shared cake and ice cream with his sister, or perhaps he would be a dad now and decide to take his own boys fishing or to play in the creek as he used to do when he was small.

This age progression photograph shows what Levi would have looked like at 30.

NEXT UP: Find out what one of the hunters who found Levi’s body had to say.

©levifrady.com 2016 – 2021. Unauthorized use and/or duplication of this material without express and written permission from this site’s author and/or owner is strictly prohibited. Contact Kimberly@levifrady.com.